Giugiaro has collaborated with Seiko to produce sport watches that are as outlandish as they are fascinating, in addition to numerous classic vehicles he's designed. What would a watch created by the same person who designed the DeLorean from Back to the Future look like? It's difficult to imagine, isn't it? In terms of style, you may anticipate it to be athletic and a little wacky, and you'd be correct. Seiko's cooperation with Giorgetto Giugiaro might leave you speechless.

In addition to designing vehicles like the BMW M1 and the Volkswagen Golf, Giugiaro has also experimented with making timepieces. In the world of watchmaking, the Seiko x Giugiaro partnership is one of the most noteworthy and unique. When it comes to watchmaking, Guigiaro and his company have been defying the rules since 1983 with their completely unconventional creations. For decades after they were created, Giugiaro's timepieces continue to captivate and excite collectors despite their outlandish appearance.

Bold coloring, asymmetric casings, and slanted dials make Giugiaro watches stand out above the others because of their automotive inspirations. In comparison to other quartz-powered Seiko x Giugiaro watches, this cooperation represents a one-of-a-kind opportunity.

Giugiaro grew up in a creative environment from the moment he was born in 1938 in the village of Garessio outside of Turin. Throughout his early years, Giorgetto's artistry was encouraged and allowed to blossom since his father was a painter. He came to Turin in 1952, when he was 14 years old, to attend the famed Golia design school. He was offered an apprenticeship at Fiat at the end of the year after a fortuitous encounter with the company's engineering leader, Dante Giacosa. The 21-year-old Giugiaro worked for seven years at the Fiat Special Vehicles Styling Center before submitting a trial design idea to Bertone, the famed design firm. Giugiaro's first automobile was the Alfa Romeo Sprint 2000, which Bertone instantly liked. It wasn't long before he was designing vehicles, watches, and cameras.

Aldo Mantovani and Giugiaro formed Italdesign in 1968, a business capable of providing innovation, engineering, pre-series prototypes, production start-up help, and all the support necessary to bring a new product into production. It was in 2002 when Giugiaro was admitted into the Automotive Hall of Fame after being selected automobile designer of the century in 1999. Since 1974, he has been responsible for the design of 14 Alfa Romeos and a slew of other automobiles, including the Lotus Esprit, Lotus Delta, BMW M1, DeLorean DMC 12, Ferrari 250 GT SWB, and Fiat Panda/Uno/Punto models.

This is when Giugiaro was at his most famous, designing the Nikon F3 camera and only a few years later, he was also working on the Apple Figaro concept computer. In 1984, he received a call from Seiko, which was his first entry into the watch industry. 7A28's first sales were strong, but the Japanese manufacturer was seeking for methods to differentiate the world's first analog quartz chronograph from the competitors.

One word sums up Giugiaro's solution to the problem: ergonomics. Each of his three 7A28 Speedmaster designs included his signature "Folded Paper" angular look, but with alterations for ease of use and comfort as a user. With its truncated oval case and sturdiness, the 7A28-5000 is the group's unsung hero. The casing is dominated by a large, screw-down rubber bumper that extends far over the case's sides and provides protection against impacts. The design of the cover and the cutouts on the bumper evoke images of a squared-off steering wheel, such as those used in sports prototypes and Formula 1 automobiles. Two short rubber segments are linked to the case's end in broad PVD rings that match the case's form and connect to its main body in an unusual, previously unheard of fashion. Additionally, this rubber strap incorporates a butterfly deployment clasp and little slots for trimming to length. Another very '80s vibe pervades this piece, this time one of aggression and sportiness. 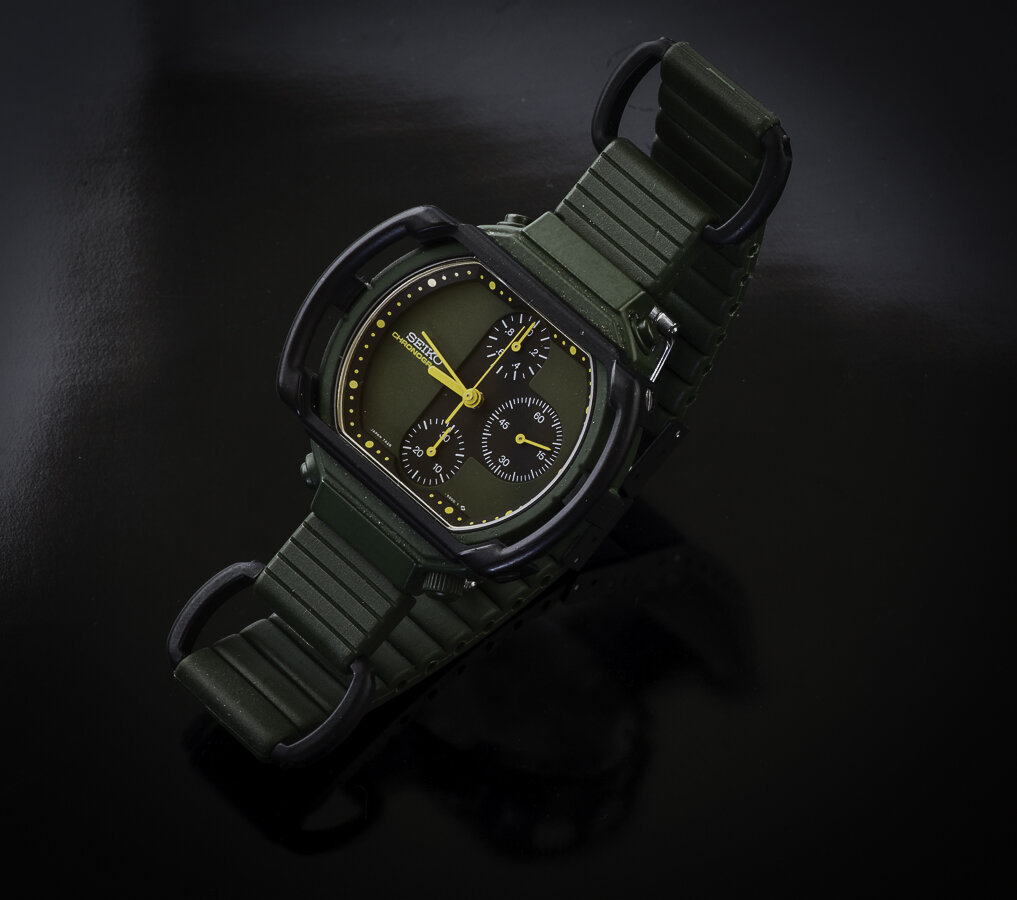 With a long history of collaborations between automakers and watchmakers, Japanese watchmaker Seiko and renowned Italian automotive designer Giorgetto Giugiaro came up with some really remarkable watches that were ahead of their time.

The Seiko Giugiaro Speedmaster “Ripley” 7A28-7000 Chronograph that featured in James Cameron's 1986 smash, Alien. Giugiaro created masterpieces of this watch. The Cal. 7A28 Seiko quartz movement powers this gorgeous Seiko quartz chronograph. Only a few years previously, Seiko launched the world's first analog quartz chronograph movement, the Seiko 7A28. Ellen Ripley, portrayed by Sigourney Weaver, wore the watch in the film Alien. According to my perspective, the watch seems more like a steampunk timepiece than the recent reissues (the Seiko x Giugiaro ref. SCED035 and SCED037). 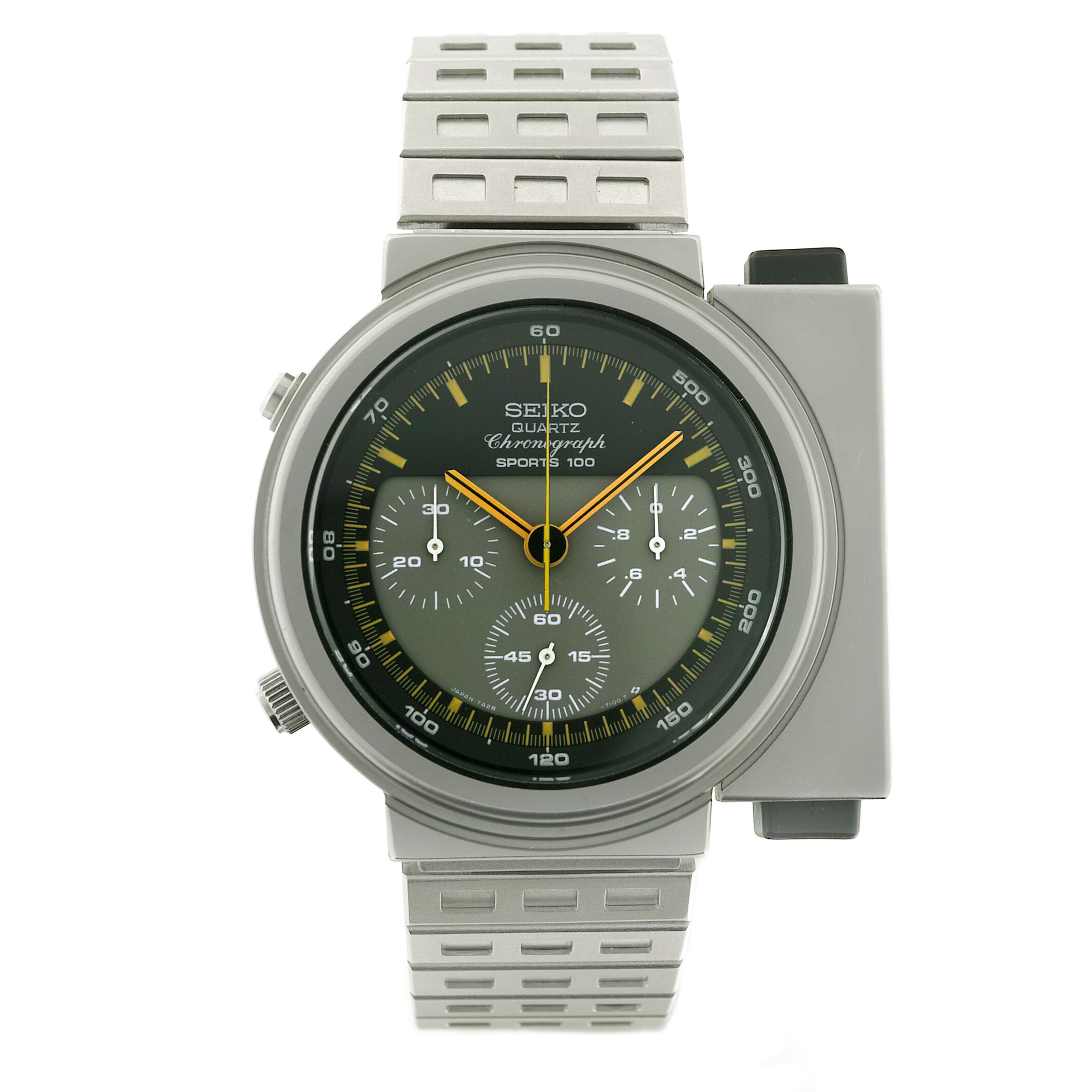 Even while the Seiko Speedmaster “Ripley” 7A28-7000 may be the most famous Seiko x Giugiaro watch, there were many more, including several worn in Alien. Watches like the Seiko x Giugiaro “Bishop” 7A28-6000 in black and red, for example, were seen in the movie. With the 7A28-5000, Seiko and Giugiaro collaborated on another vintage Seiko quartz chronograph: a square-shaped chronograph that had an unmistakable "military" vibe. The Seiko Giugiaro 7A28-7000 and 7A28-6000 were introduced in 1983 at the same time as the Seiko Cal. 7A28 chronograph movement, both designed by Giugiaro himself.

For the most part, Seiko and Giugiaro collaborated on automotive-themed watches, such as chronographs, with the dial slanted slightly clockwise to enhance the sporty aesthetic and make it more useful for drivers. Even in the 1980s, it had a unique style. There have been several more recent Seiko releases, including the limited edition Seiko “Rider's” Chronographs, issued in 2013 to commemorate the Seiko Cal. 7A28's 30th anniversary, which included the Seiko 7T12 chronograph movement. There are also some that deviate from the initial goals of the joint venture. Despite this, the Seiko Giugiaro watches are still sought after by collectors for their unique throwback look.

Giannopoulos, I. (2016). Giugiaro’s Legacy: A Watch and A Car – A Different Perspective on the Reissue of an Iconic Quartz Chronograph by Seiko. Available from https://monochrome-watches.com/guigiaros-legacy-a-watch-and-a-car-a-different-perspective-on-the-reissue-of-an-iconic-quartz-chronograph-by-seiko/

Love, Z. (2020). This Italian Car Designer is Responsible for Some of the Funkest Seiko Watches Ever Made. Available from https://www.gearpatrol.com/watches/a33314365/seiko-giugiaro-design-watches/

The Spring Bar. (2019). Seiko 7A28 Collector’s Guide. Available from https://thespringbar.com/blogs/guides/seiko-7a28-collectors-guide/2/